As the proud owner of one of Steve Ricks’ famous Tennant Coats, it was only a matter of time and money before I commissioned him again. This time though, it was the Matt Smith look I was working on. 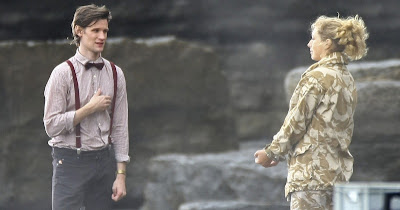 A bit of background: when those pictures were published of that Southerndown beach shoot in July last year, a lot was made of the tweed and bow tie. However, for me, the two most striking elements of the costume were the boots (oh those elusive All Saints...) and the shirt; such a strange but stylish pattern, when combined with the bow tie and tweed gives a strangely modern but retro look at the same time. In fact, when I first snapped eyes on the shirt I thought ‘old-man’s shirt’ - kind of knackered, charity shop style. It wasn't until you venture up close and see that design that you realise there is more than meets the eye. 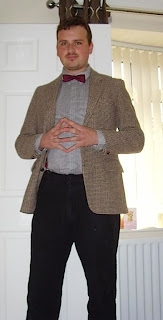 My good friends on Gallifrey Base went into costume over drive and we soon worked out the various brands: All Saints boots, Topman trousers, Harris Tweed jacket and... a Paul Smith shirt. Yes PS by Paul Smith to be precise, but I was surprised.

I checked out the John Anthony website and they were selling the burgundy shirt, but only had S, M and XXL. Now if I knew what I know now about the sizing, I would've snapped up the XXL there and then, however I decided that at £55, I wanted a good fit. So I noticed an alternate colour, navy blue and grabbed an XL and was disappointed to find it was very very snug. Now I don’t consider myself a particularly large chap, but I was making this thing bulge out in a not too attractive manner! So, in the wardrobe it went for a while.

When subsequent filming shots of Matt Smith were released from Croatia (I think), he was sporting that navy shirt (he had been in burgundy up until then). I was immediately fired up to get this shirt of mine wearable. Enter Steven Ricks. 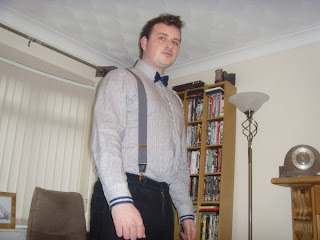 So impressed was I by his customer service and top quality work, I asked him whether he could mod my blue shirt in the MS style - the factory shirts come with little blue sleeve straps to tie the rolled sleeves back. These are removed and stitched onto the edge of the cuff to create a distinctive finish. Also, the buttons are covered by fabric on the PS shirt but not on the Doctor’s.

Steve told me to send the shirt to him so he could examine the pattern so he could prepare a reproduction and while it was in his possession, he would perform the mods. Not only that, but he said that he could also provide me with more breathing space by letting it out at the back. 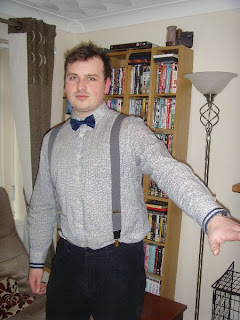 When the shirt returned to me a few weeks later, it was as you will see it on screen. Finished beautifully, the cuffs are brilliant now and the buttons are visible (on a button stand I believe - am not particularly well versed in tailoring parlance). But this is the clincher - it fits like an XL now. God knows what kind of sizing Paul Smith were using for the factory shirts - I nearly went for a Large, which is what I am in a Marks & Spencer type shirt. All this for a very reasonable price.

Steve Ricks: The man is versatile, thoughtful, very amiable and communicative and above all, his final product is so worth investing in. I can now wear this shirt day to day and not worry about breathing in the whole time. Money well spent.

All I need to do now is find those damn boots... 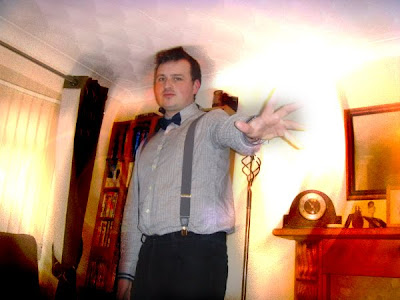 Posted by Steven Ricks Tailoring at 18:44