As well as covering the modifications I am doing to my original Paul Smith PS shirt, I also thought I’d share some of my experiences gathering the other off-the-shelf items I managed to grab before they too sold out.

An early read-herring was contained in a BBC News online story called The fashion police on Doctor Who's new outfit. In it the boots worn were incorrectly identified as being Prada. The comment that they had “just arrived in the stores” made them feel very accessible, so it wasn’t long before I was doing searches to see if I could find them. I did see something on their website which was similar, but just not quite the same, with a hefty price-tag attached. Just as well I didn’t snap them up, as it took the work of a member of the online forums to spot they were actually from All Saints, a chain of stores in the UK, and not Prada after all. 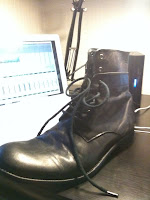 The first photo published of the boots (see right) clearly showed an accurate match, right down to the subtlety of the contrasting coloured leather at the ankle, something I had not noticed in the official image.

Further postings in the thread quickly showed that far from being “just arrived in stores”, they we actually already last-season and were only available as remaindered items in All Saints autumn sale.
Urghhh! 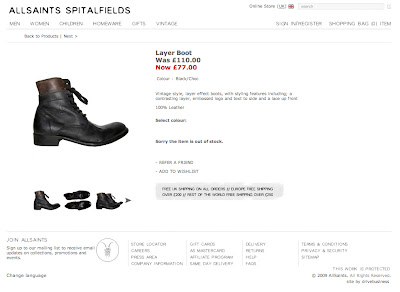 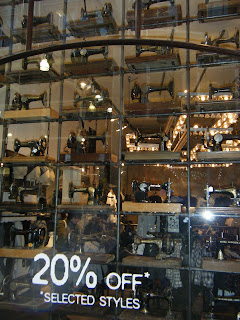 Now, All Saints have stores across the UK, but they are spread quite thin, though there are three stores in London alone.

As an aside, I was aware of their stores for a while, as several I had seen sported striking window displays with literally dozens of Singer and other antique sewing machines arranged on shelves in a grid format.
I scoured the Westfield display (see left), one of the largest such in the UK, but sadly could not see the model I own.

I started with these to see if I could track down a pair, but found they were already out of stock. One branch did show a pair on their computer system, but when they checked they could not be found. This is apparently common when supplies run down to their last pairs as it is only when one or two are left that discrepancies in stock-taking become clear.

Some further phone calls to other branches found one or two pairs in Birmingham and Glasgow, but none in sizes that would fit me. 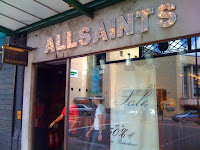 Then I called the Bristol branch (see right) and discovered that they not only had them in stock, they had two pairs in-hand, one in my size and one in the size up from that.
I asked if they could be transfered to a London store for me to collect, but was informed that since they were stock in their autumn sale it would not be possible (they only do that as a service on full price items, besides their stock control tends to go to pot during sales times apparently!).
A telephone appeal to the customer service department of All Saints head office fell on deaf ears. 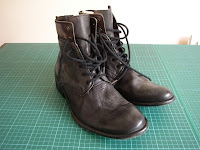 I called the Bristol store back and spoke to the manager, who was doing his best to be helpful, but his hands were tied to some extent.
I asked if I could pay by credit card over the phone and have them shipped – but that was a non-starter as they are not legally authorized or trained to take payment in that way without the card holder being present.
It was looking like the only way I would secure them would be if I traveled down to the store and collected in person, so I asked if they could be put to one side for me to pick up the next day.
This too was not an option as if he had a walk-in buyer that afternoon he would have to sell them to that customer. 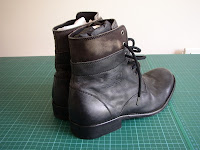 The first olive branch I did get was an offer that if I called back at 5pm, and no-one had bought them til that point, I could have them put to one side, so long as I was at the store on its opening the next morning.
I waited a few tense hours – watching the forum thread in case anyone else had got wind of them (sorry guys, love and war and all that) – but luckily no-one had.
I called back at 5pm as agreed and sure enough both pairs remained unsold. I was very happy :) 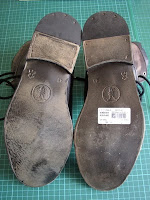 So the next morning, bright and early, we set out to do the two-hour 130 mile trip to Bristol. We got there a few minutes before the store opened, and with a suitable anti-climax, found the manager and the boots put to one side for me. I paid for them as was back on the road within minutes of getting there!

I had decided to buy both pairs, just to make sure I got a pair to fit, with the intention of selling of the lesser pair to recoup our petrol costs, which I successfully did a few weeks later.

From what I gather, there were few other pairs around and I was lucky to grab what I did.
For that I am grateful to the Manager of the Bristol branch of All Saints! 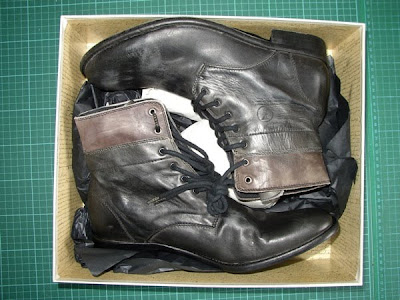 Posted by Steven Ricks Tailoring at 17:27