I mentioned in my previous post that as well as modifying my own Paul Smith PS shirt, I have also been looking into making reproductions of the Matt Smith shirt for those who missed out on the opportunity to grab one when they were available.

I explained how I had been working on replicating the fabric design using Spoonflower, but quickly skipped to the end so I could show the swatch samples I had created for anyone interested.

I promised to write about how I had gotten to that point, and here it is.

After the success of the Seven Hatband Hankies, I knew it was entirely possible to scan existing fabric and recreate it using the likes of Spoonflower. As I wrote in the Seven Costume Blog, the hankies had their own challenge, not helped by the original being distorted and twisted out of true when it was scanned. However, patching it together was highly successful, when I had worked out the right technique. 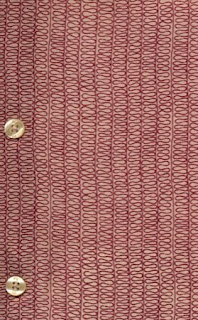 For the Matt Smith shirt, I started by doing a good quality high resolution scan of the front of the shirt, making sure to keep the fabric as flat and taught as possible (see left).

When opened in Photoshop I made sure it was accurately square and rotated it as needed.

Despite the apparent randomness of the design, there must be an established pattern repeat in the fabric. The question was to find it.

I picked on a squiggle that was distinctive, and copied an area around it; pasted it back on top, and made it transparent; I could then slide it up and down the fabric until it phased with its repeat above and below.
This gave me horizontal guides for the repeat. 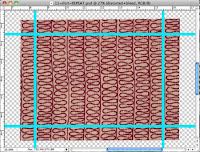 I did the same for sideways and found the repeat in that direction. I then placed guides here too, isolating the area of the repeat (see right).
I allowed myself some overlap to remain which I will fade out so the joins won’t show, but then deleted the rest of the  scanned image. 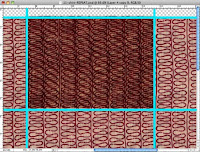 Next was to check the repeat was working, so I copied the area inside the guides and replicated it surrounding the image, creating my own repeat. (see left).

At this point it was critical to correct any discrepancy of alignment or repeat. I spent some time until I was happy. 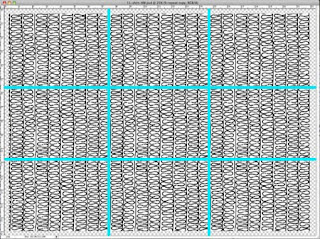 The scan I had been working with included the background colour of the design and showed the weave of the fabric itself. I retouched the isolated repeat to eliminate this, before reducing it to a simple black and white high contrast linework image.
I have done it this way so that I can apply a consistent colour across the design.

Before applying the colour, I built a three-by-three grid which ‘proves’ the repeat (see right), ready to step-and-repeat it enough times to cover my entire fabric.

Usually you would only need to provide the isolated area to Spoonflower to do the step-and-repeat online, however, I have a clever little trick planned, so I need to produce a single image to cover the entire area of the print run.

Having done all the careful preparation, this was a relatively simple process and I soon had a three-yard length of pattern repeat ready for the next step (see left).

In the meantime though, I had some space on the side of a reprint of the Seven Hankies, so I added some swatch samples, which I have made available for sale (see below).


If you would like a Eleven Shirt fabric swatch, please PayPal US$20 to tennantcoat@me.com, remembering to include your postal address and a note that you want the swatch.


Look out for the next stage of my process to replicate the shirt. 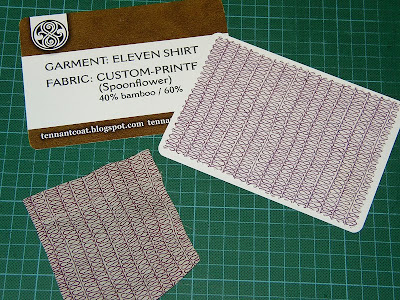 Posted by Steven Ricks Tailoring at 07:15