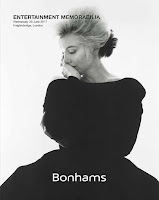 There’s only one Doctor Who item for sale in this month’s Bonhams Entertainment auction, but it is something of a landmark.

Although this is being marketed principally as a Dalek that appeared in the Twelfth Doctor’s ear, it made it’s first appearance in a Matt Smith episode. 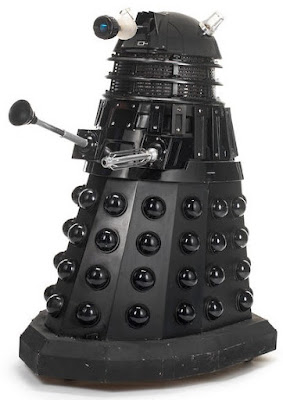 Lot 54
Doctor Who: A Black Dalek,
constructed to BBC "New Series" specification, appearing in the BBCtv Doctor Who Episodes "Asylum Of The Daleks" and "The Magician's Apprentice/The Witch's Familiar", principally of wooden construction (with fibreglass, metal and plastic elements) in four sections comprising: (1) integrated base & skirt, (2) 'shoulder' section, (3) neck 'bin' with embrasure frame and (4) dome, painted matte black overall with details in gloss black, including: approx. 4in (10cm) trolley wheels attached to the wooden frame which underpins the skirt, gloss black hemispheres on matte black skirt (which includes internally a foam-padded bench seat for the operator and dual speakers for sound), gloss black slats on the matte black 'shoulder' section, a three-tier metal manipulator arm maximum extension 31 1/2 in (80cm) with rubber 'sucker' cap, a highly polished metal gun-stick and rods, neck bin of plastic matting painted black with black wooden embrasure, the black fibreglass dome featuring unique identification code (painted in white beneath the eye), metal and plastic eyestalk with translucent plastic rings and illuminating black eyeball, and transparent dome light fittings with bulbs and polished metal frames, approximately 63 in (160cm) high,
FOOTNOTES
This Dalek was originally for charity display use, but subsequently appeared in "Asylum Of The Daleks" (TX 01/09/2012 on BBC-1) and "The Magician's Apprentice/The Witch's Familiar" (TX 19/09/2015 & 26/09/2015 on BBC-1).

During the first of these episodes, the Doctor (Matt Smith), Amy (Karen Gillan) and Rory (Arthur Darville) were kidnapped by the Daleks and sent to their 'asylum' planet to head off a break-out of the unstable Daleks imprisoned there. It was there that the Doctor met the first of the manifold Clara Oswalds (Jenna Coleman) created during the events leading up to the series 50th Anniversary. In the latter episodes, the next Doctor (Peter Capaldi) - accompanied by Clara and "Missy" (Michelle Gomez) - was summoned to Skaro (the Daleks' home planet) for one last visit to their creator, Davros, who seemed to be on the brink of death. This proved to be a sophisticated ruse to enable Davros to drain the Doctor of his regenerative power, but was insufficient to fool him. As has happened on so many previous occasions, the Doctor turned the tables and defeated him.

Most recently, the Dalek appeared in the Cardiff Bay segment of the 2017 "Comic Relief" Television Appeal.

Intellectual property rights and Trade Marks of the BBC/Terry Nation Estate require that this screen-used item must be used for personal home display only; any and all commercial use is prohibited expressly.
Estimate £10,000 - 15,000
Sold for £ 18,750
Posted by Steven Ricks Tailoring at 14:59