A Christmas costume of delights

So, the Ponds have gone - and so it seems is any form of style The Doctor had in his wardrobe!

Matt started out in season five with a slightly make-shift costume, cobbled together in haste. This was refined in series six with a more tailored interpretation of his tweed and jeans look.

But all that has well and truly gone out of the window come The Snowmen, this years Christmas special.

There were a number of fan-taken location photos floating around the net, but we now have the first of the official publicity pictures show The Doctors new look.

Here’s a little mini breakdown with my first impressions of the costume, and how it seems to be a nod to a lot of previous Doctors from times gone past. 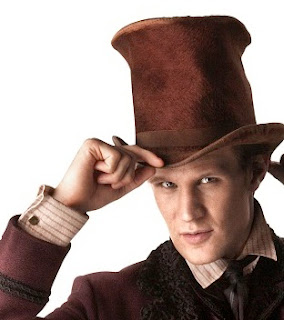 Hat
Not for the first time, Matt now has a hat - a battered felt top hat making him look like the artful dodger (rather than Jammie dodger!)

Shirt
His shirt is new - without the tabbed collars seen in series six and seven, but with French cuffs and cufflinks.

The fabric is reminiscent of the scroll striped fabric of the series five Paul Smith shirts; and he wears the collar up at the back of the neck, not unlike the way Patrick Troughton wore his shirts in the 1960s. 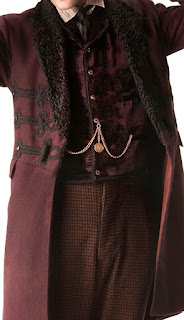 Frock Coat
The coat is what I would describe as a frock coat, with the distinctive waistline seam and pockets. It is closed with frog fastenings, not unlike a smoking jackets from the Pertwee era.
The collar and lapels are faced with curly Persian lambs fur, reminiscent of the ambassadors hat Hartnell wore in the pilot episode nearly 50 years ago. 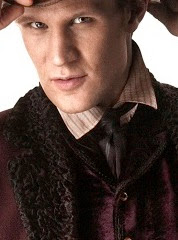 Tie
Shock Horror!
For the first time ever, Matt is NOT seen wearing a bow tie as part of his main costume.
Instead he is wearing a tightly knotted dark striped tie. It’s difficult to see detail on the images released so far. 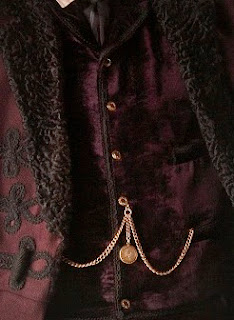 Waistcoat
For the first time Matt has a waistcoat.
Down the years a number of Doctors have had waistcoats, with only Nine and Ten not wearing one at some point or other (think about it - every other Doctor has, even if only for one adventure).

The fob chain is something associated very much with the Sixth and Eight Doctors. 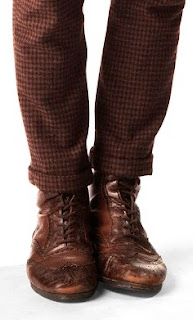 Trousers
The trousers look to be made to a similar cut to G-Star RAW jeans of series six and seven, but made from a houndstooth tweed. Again this reminds me of William Hartnell’s costume from the 1960s.

Boots
His boots are made by his now regular bootmakers, but in a brown leather with a heavily fretworked toe.
This will be cropping up again in future episodes.
Posted by Steven Ricks Tailoring at 14:52