I was out today doing my job as tour guide for the Unofficial Doctor Who London Locations Tour for Brit Tours. 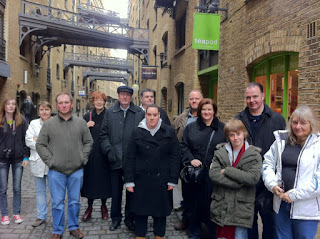 I had a bus-load of fourteen eager Doctor Who fans to show around London, and we took in the usual sights from episodes of the classic series. 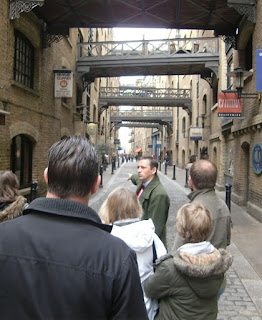 Butlers Wharf (see left) and Windmill Walk were the highlights, since they were used in popular Dalek stories, Resurrection Of The Daleks and Remembrance Of The Daleks, and we also saw St Peter’s Steps near St Pauls (as seen in Invasion) as well as The Globe Theatre (from The Shakespeare Code). 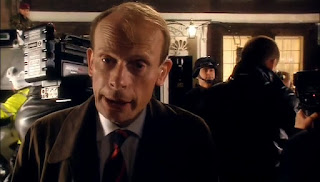 Since the new series is based in Cardiff, not much gets filmed in London these days, so it gives us the Brandon Estate near Kennington (which was where Rose Tyler lived); and John Adam Street around the back of The Strand (which doubled for Downing Street in Aliens Of London).

When we get to John Adam Street I usually have to show the episode clip on my iPad to show how it looked redressed as Downing Street as it a bit of a stretch. 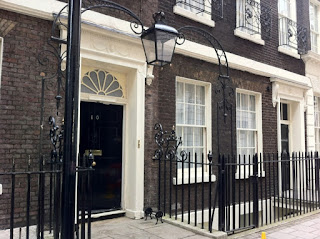 However, today was a bit of an unexpected surprise. As we rounded the corner I could see a film crew with lights and camera tracks littering the street right where we needed to go. They weren’t actually shooting, but to our collective surprise they had dressed the door to look like Number Ten Downing Street – just like in Aliens Of London!! 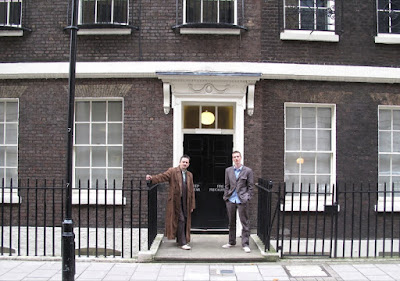 As a reminder, this is what the street normally looks like, taken when I did  guided tour for Mark Ferris in 2010

I had a word with one of the crew and found they were filming Coup, a four-part tv series for Channel 4 based on A Very British Coup by Chris Mullin. 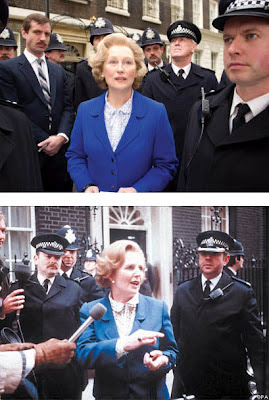 I did a bit of digging and have found that John Adam Street is almost the location of choice when a double for Downing Street is needed. It popped up in Johnny English, and more recently it was used in The Iron Lady with Meryl Streep as Margret Thatcher.
See how well it compares between these two pictures (see left) with the film (top) and the scene it recreates (bottom). 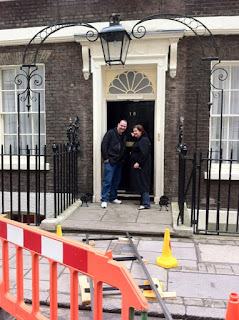 It certainly gave some of my tour group the chance of some pictures to send home to the family, making them think they had been to the REAL Downing Street!

Even I got in on the act to get my photo in front of that famous black door.

Before we left I got everyone to pose for a group shot outside the door, and offered to take further pictures on everyone’s cameras.

This made the tour a bit special compared to the usual! 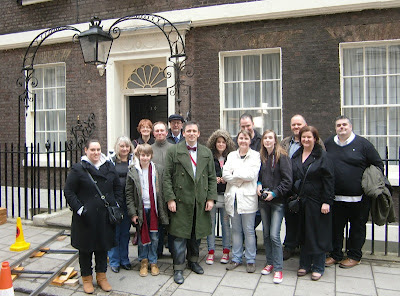 Posted by Steven Ricks Tailoring at 21:32